It's like an explosion underwater. Several camouflage groupers rush to release their sperm as a female fish drops a burst of eggs.

This image taken at Fakarava Atoll in the Pacific has earned Laurent Ballesta the prestigious title of Wildlife Photographer of the Year (WPY).

"It's partly the setting, taken during a full Moon, but also the timing of it, knowing when to take the picture."

The annual spawning of camouflage groupers occurs in July. It's been known to draw up to 20,000 fish, along with many reef sharks looking for a meal. Overfishing threatens the groupers, but this picture was captured in a reserve that gives them some protection.

"We spent five years in this place, 3,000 hours of diving, to get this particular moment," Laurent said.

Ten-year old Vidyun R Hebbar from India is the Junior Wildlife Photographer of the Year for this picture of a tent spider in its web. The image is called Dome Home.

The blurred green and yellow colours in the background belong to one of those three-wheeled tuk-tuk taxis.

"Its focusing is pin sharp," Roz Kidman Cox told BBC News. "You can actually see the little fangs if you blow up the picture. I love the way it's been framed and the way you can see all the texture of the web, its lattice structure."

Vidyun recalled: "It was challenging to focus the tent spider because the web shook every time a vehicle passed by."

Started in 1964, WPY is organised by London's Natural History Museum.

The competition attracts tens of thousands of entries each year. Scroll down to see some of the individual category winners. 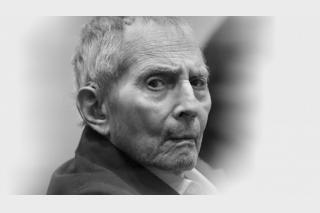 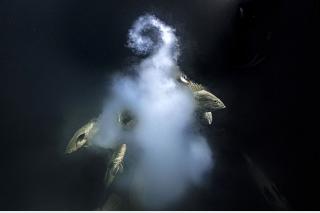