Inside The Brutal History Of Indigenous Residential Schools In Canada

From 1883 to 1996, nearly 150,000 Indigenous children were forcibly taken away from their parents and sent to Canadian residential schools where they faced horrific abuse. 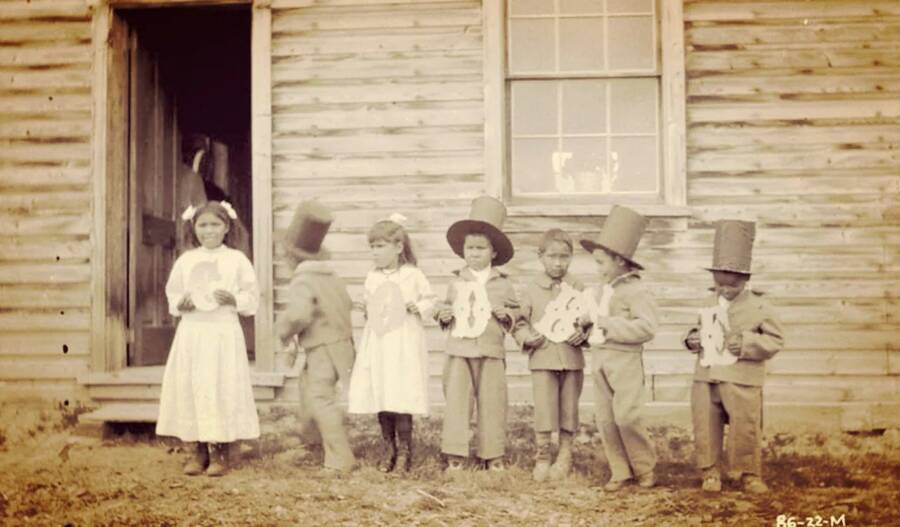 Children at an Indian Residential School in Ft. Simmons hold letters that spell out “Goodbye.”

For over a century, Canada held a dark, open secret. All across the country, officials forcibly took nearly 150,000 Indigenous children away from their parents and sent them off to abusive “residential schools.”

These schools, which operated from 1883 to 1996, banned students from speaking their native languages or practicing their cultural beliefs. Many of these students faced systemic abuse on a regular basis. Even worse, some children mysteriously vanished on the school grounds.

Thousands of kids — some estimates range from 10,000 to 50,000 — simply never came home. Though some ran away, thousands more died at the schools. Today, as their remains are slowly recovered from school grounds across the country, Indigenous leaders are demanding answers.

Those answers remain elusive. But they also represent the tragic end of a 100-year-old story — which is finally seeing the light of day.

The Creation Of Residential Schools In Canada

By the time European settlers began arriving in Canada en masse in the 16th century, Indigenous people had already lived there for thousands of years. At first, the settlers and the Indigenous people tried to coexist peacefully. In 1701, they agreed to share the territory like “a dish with two spoons.”

But the peace didn’t last. By the 19th century, settlers had begun to demand more access to land across Canada — land that belonged to the Indigenous people. And many of these settlers ascribed to the British Empire’s belief that they had a duty to “civilize” Indigenous people.

In 1857, the Gradual Civilization Act mandated that Indigenous men learn English and French. The Act also demanded that they disavow their traditional names and adopt government-approved names instead.

By 1883, Canada opted to go one step further. The government decided to use schools as a way to assimilate Indigenous children at an early age.

In order for these Indian Residential Schools to be successful, argued Sir John A. Macdonald, the first prime minister of Canada, the Indigenous children must be removed from their parents.

“When the school is on the reserve, the child lives with its parents, who are savages,” Macdonald declared in 1883, “and though he may learn to read and write, his habits and training and mode of thought are Indian.”

Indigenous children, insisted Macdonald, must be taken “from the parental influence.” He said that they should spend their childhoods in schools “where they will acquire the habits and modes of thought of White men.” 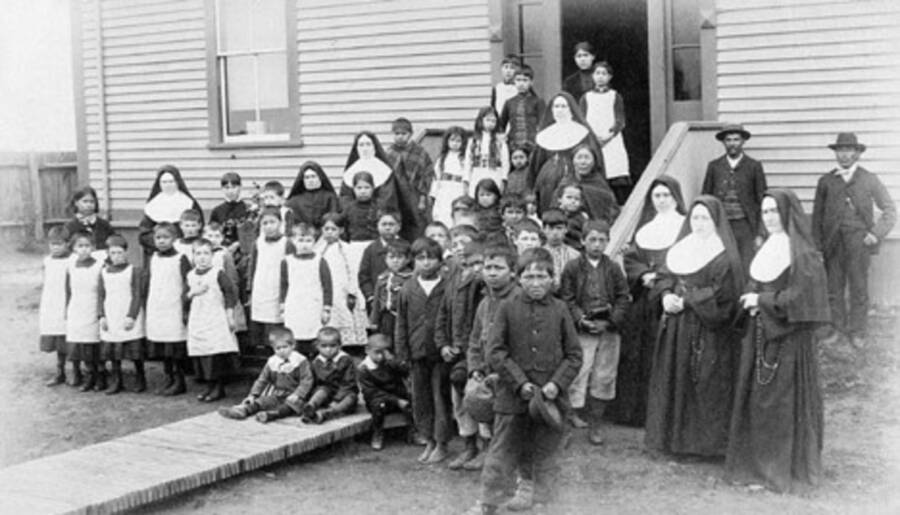 Nuns with Indigenous children in Port Harrison, Quebec. Circa 1890.

Before long, about 150 schools — run by Catholic, Anglican, United, and Presbyterian churches — opened across Canada in partnership with the federal government. But they sought to do more than simply educate the kids. The Indian Residential Schools in Canada aimed to eliminate the children’s Indigenous knowledge and identity altogether.

“I want to get rid of the Indian problem,” stated Duncan Campbell Scott, the former deputy minister of Indian Affairs, in 1920.

Scott continued, “I do not think, as a matter of fact, that the country ought to continuously protect a class of people who are unable to stand alone. Our objective is to continue until there is not a single Indian in Canada that has not been absorbed into the body politic.”

But Indigenous people in Canada had no choice in the matter at all. Whether they were members of the First Nations, the Inuit, or the Métis communities, government officials just showed up at their doors and took their children.

As one Inuit survivor named Piita Irniq explained: “I was forcibly removed, taken, kidnapped by a Roman Catholic priest and a government man in August of 1958 so that I could be taken, like all of my generation of Inuit, to go to a residential school. We were taken away from our parents.”

Life For Indigenous Children At The Schools

Multiple generations of Indigenous children spent much of their childhoods at Indian Residential Schools in Canada. Those who survived the ordeal often describe a terrifying atmosphere of violence and abuse at the hands of priests, nuns, and other staff members at the schools.

“They made us believe we didn’t have souls,” recalled Florence Sparvier, who attended the Marieval Indian Residential School. Sparvier recalls suffering physical abuse as staff members attempted to scare her away from her Indigenous identity — and discourage her from practicing her culture.

“We learned,” she said. “They pounded it into us. And really, they were very mean. When I say pounding, I mean pounding.”

Others recall suffering sexual abuse at residential schools in Canada. John Jones, who attended the Alberni Residential School, remembers hearing about a male supervisor who gave out chocolate bars to students. When Jones went to get some, the man sexually abused him.

“I don’t know how long that lasted, but I know I threw the chocolate bar in the garbage,” said Jones. “I took baths three or four times a day to feel clean, and it didn’t help.”

Another survivor, Jack Kruger, who attended St. Eugene’s Mission residential school, remembers that his best friend killed himself after being sexually abused by a priest — when he was just six years old.

“When you’re a little boy, you couldn’t do nothing,” said Kruger, who spent three years at the school. “You couldn’t say nothing. The priests had so much damn power. It’s incredible.” 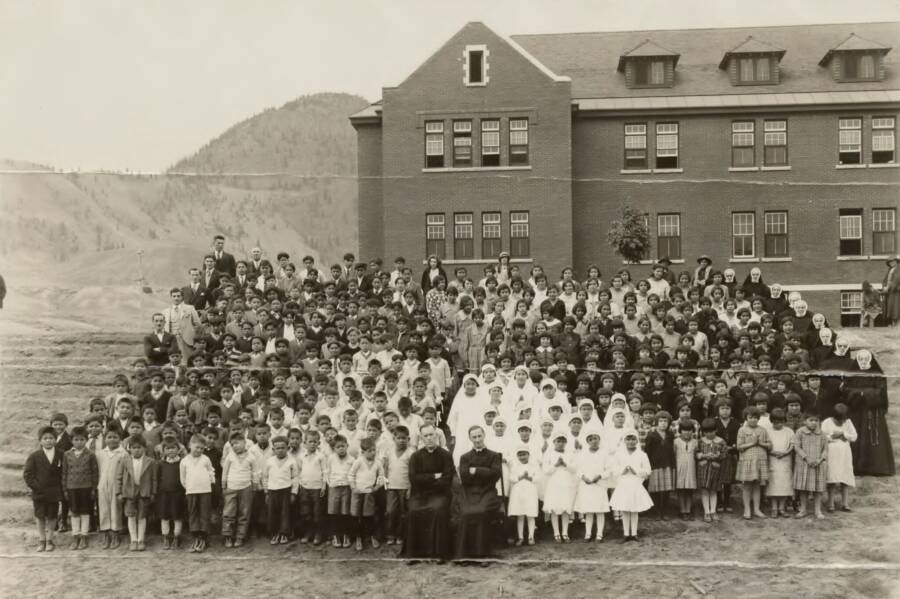 National Center for Truth and Reconciliation

Indigenous children, nuns, and priests at the Kamloops Indian Residential School in 1937.

To make matters worse, Canadian authorities were aware that the schools had several problems. In 1907, Indian Affairs chief medical officer Peter Bryce visited 35 Indigenous schools in Canada and found that 25 percent of their students had died. At one of the schools, 69 percent had died.

The schools, Bryce noted in his report, were poorly constructed and had bad ventilation. Tuberculosis spread like wildfire. Meanwhile, other officials noted issues with overcrowding, faulty heating, and inadequate nutrition.

“We cried to have something good to eat before we sleep,” recalled Andrew Paul, a survivor of the Aklavik Roman Catholic Residential School. “A lot of the times the food we had was rancid, full of maggots, stink.”

Though some of the students died of diseases like tuberculosis, others simply vanished. Their parents never learned what happened to them, although sometimes Canadian authorities said they’d run away.

“Sometimes kids would not show up in classroom,” said Garry Gottfriedson, a survivor of Kamloops Indian Residential School. “They would disappear for the next day and we knew that they were gone, but we didn’t know where they were gone.”

But on a number of occasions, survivors witnessed death firsthand. Some victims were beaten so brutally that they died due to their injuries. And some survivors have testified to seeing babies — born to young female students who had been raped by priests — deliberately killed.

Despite horrific stories like these, the schools operated for more than 100 years. The last Indian Residential School in Canada didn’t close until 1996.

The Ongoing Search For Answers

More than a decade after Canada’s last residential school closed, the government finally began to reevaluate the schools’ place in Canadian history. In 2008, the Canadian government offered Indigenous people a formal apology. And in 2015, Canada’s Truth and Reconciliation Commission determined that the schools were guilty of “cultural genocide.”

The Commission report also named some 3,200 students who had died while they were at the residential schools. But many Indigenous leaders believe that the number could be much higher — possibly in the tens of thousands. And in recent years, they’ve gone to find proof for themselves.

In 2021, members of the Tk’emlúps te Secwépemc Nation swept the grounds of Kamloops Indian Residential School with ground-penetrating radar. Tragically, they found 215 small bodies on the grounds.

And just a few weeks later, members of the Cowessess First Nation used ground-penetrating radar to uncover as many as 751 childrens’ bodies at the since-demolished Marieval Indian Residential School. 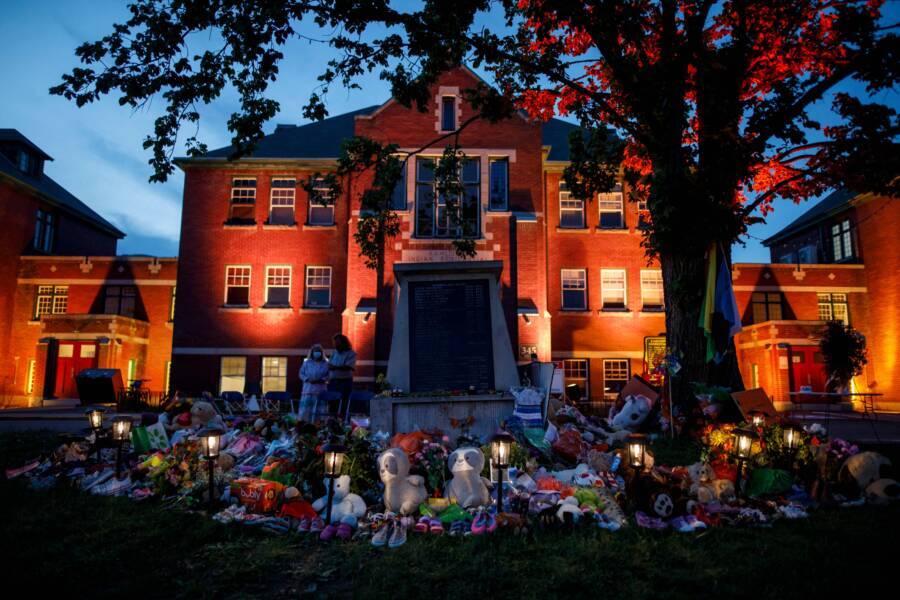 A shrine for children at Kamloops Indian Residential School, where tribal members found 215 bodies in 2021.

“We had a knowing in our community that we were able to verify,” Tk’emlúps te Secwépemc Chief Rosanne Casimir said. “At this time, we have more questions than answers.”

Murray Sinclair, a member of the Peguis First Nation who led the Truth and Reconciliation Commission, agrees.

In the end, finding the answers to these questions remains the goal of countless Indigenous people across Canada. For 100 years, the Indian Residential Schools took their children. Now, they want to bring them home. 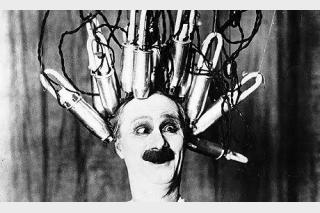 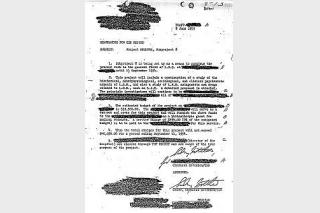 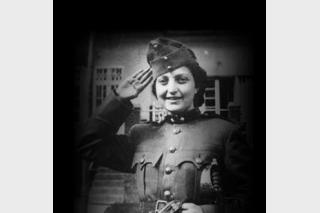 Inside The Brutal History Of Indigenous Residential Schools In Canada