Megalodon: The Prehistoric Shark 10 Times The Size Of T-Rex

Megalodon's name literally means 'big tooth' and with good reason — its jaws were strong enough to crush a car.

The megalodon shark was one of the fiercest and largest predators to ever swim in the ocean. Capable of reaching lengths twice the size of Tyrannosaurus Rex and carrying a bite force that could crush an automobile, the megalodon, or Carcharocles megalodon, was the ruler of the prehistoric seas.

And yet, despite being at the top of the food chain with no known predators, the megalodon shark went extinct around 2.6 million years ago. 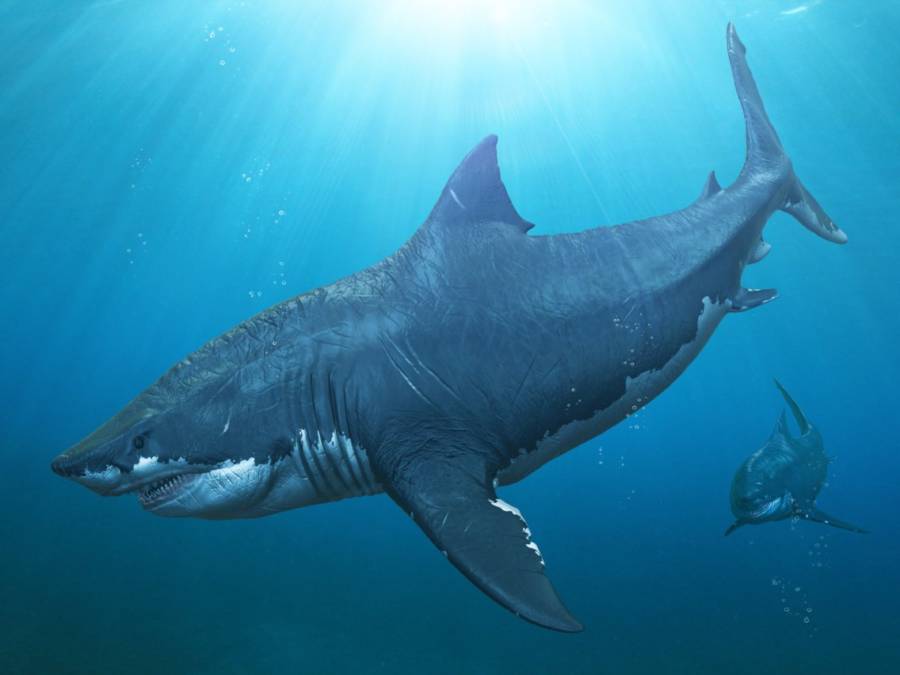 A reconstruction of megalodon.

It’s a mystery we’ve yet to solve. There are countless theories, but nobody has been able to explain for sure why, right before the dawn of humanity, one of the ocean’s deadliest predators disappeared.

The Biggest Shark That Ever Lived 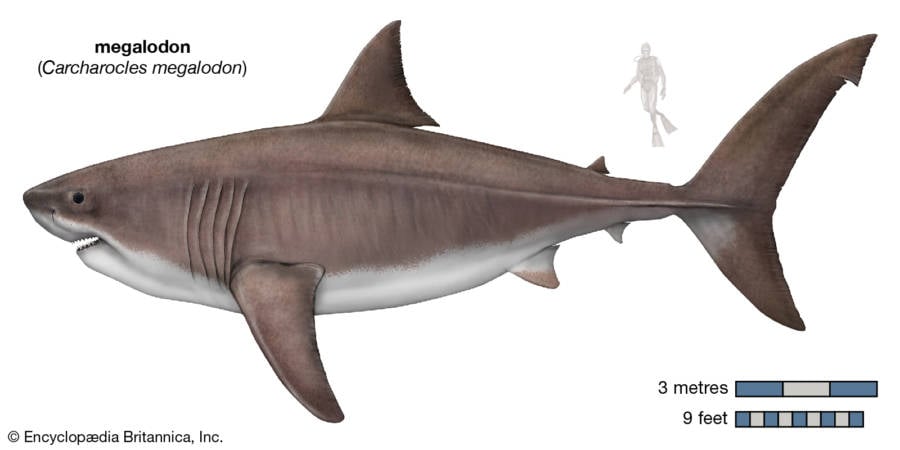 The size of a Megalodon compared to a human.

The megalodon is the largest shark ever documented, though exactly how massive the animal was varies based on the source. The more modest estimates say that the shark grew up to 60 feet, which is roughly the size of a standard bowling alley lane.

But other sources say it was far larger and posit that the megalodon could have reached more than 80 feet, making it the length of three of London’s famous double-decker buses. 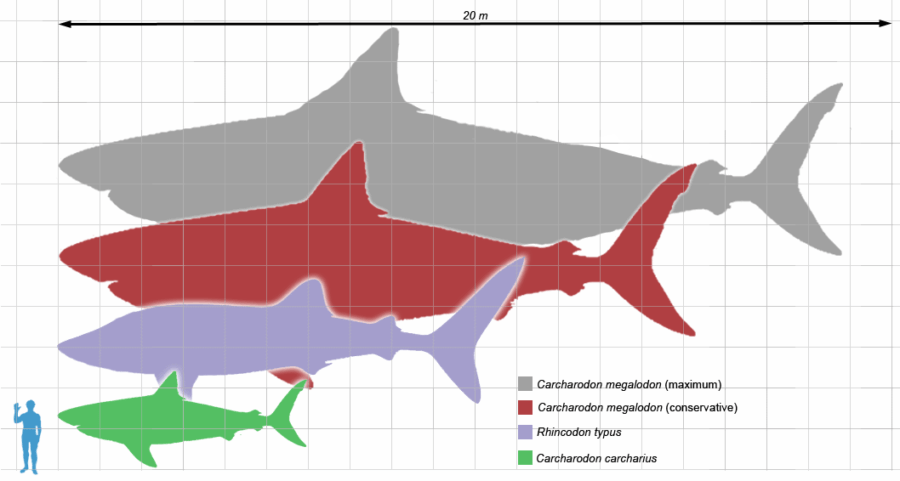 Size comparison of the great white shark and humans to the maximum and conservative size estimates of the megalodon.

Either way, they dwarfed the sharks in our oceans today. According to shark expert Peter Klimley, if a modern great white shark swam up beside a megalodon, it would just barely match the length of the megalodon’s penis.

The megalodon’s enormous weight matched its size. Adults reportedly could weigh anywhere from 66,000 pounds to more than 143,000 pounds. 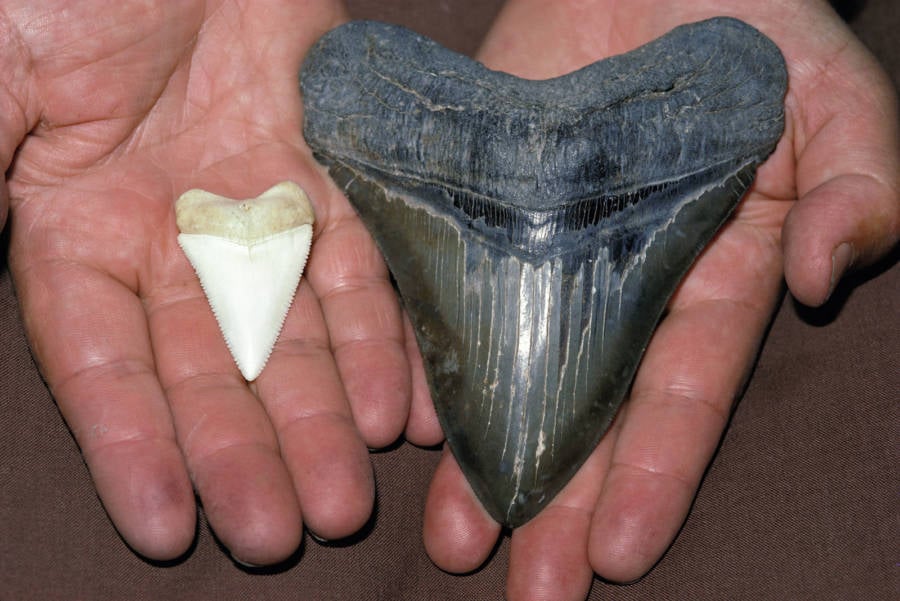 The megalodon tooth (right) is significantly larger than the tooth of a modern great white shark (left).

The megalodon’s teeth are the best tools researchers have to discover any information about this long-lost beast – and they are ghastly reminders of the pain that this underwater behemoth could inflict.

Like the great white, the megalodon’s teeth were triangular, symmetrical, and serrated, which made them perfect for tearing through the flesh of their prey. According to researchers, sharks a set of teeth every one to two weeks and produce somewhere between 20,000 and 40,000 teeth in a lifetime. 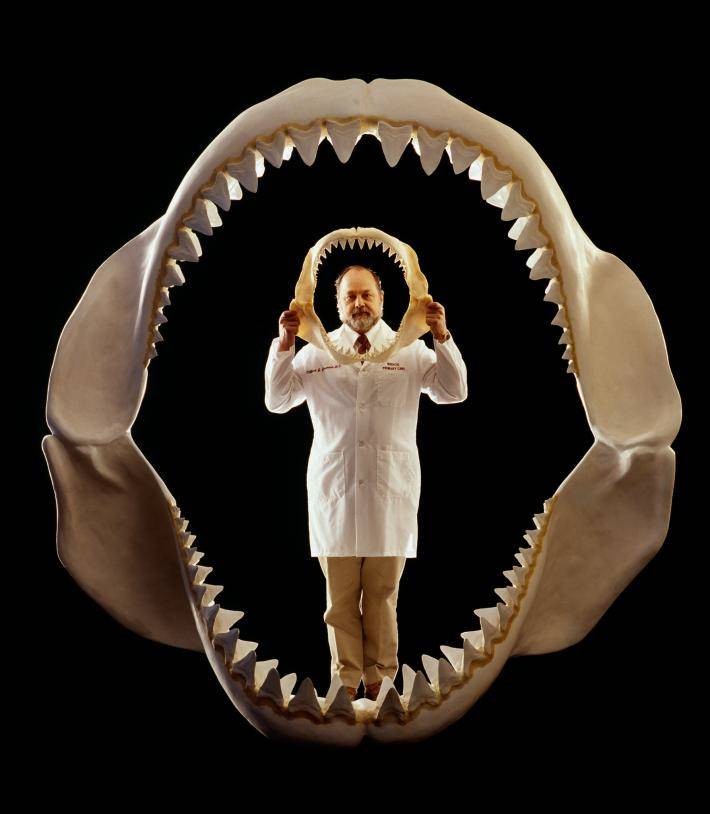 Dr. Jeremiah Clifford, who specializes in fossil reconstruction, holds the jaws of a large great white shark while standing in the reconstructed jaws of a megalodon.

Those jaws were some of the mightiest that ever terrorized the earth. The average human’s bite force is around 1,317 newtons. The megalodon’s bite force clocked in somewhere between 108,514 and 182,201 newtons, giving them a bite powerful enough to crush a car.

The Prehistoric Shark That Preyed On Whales 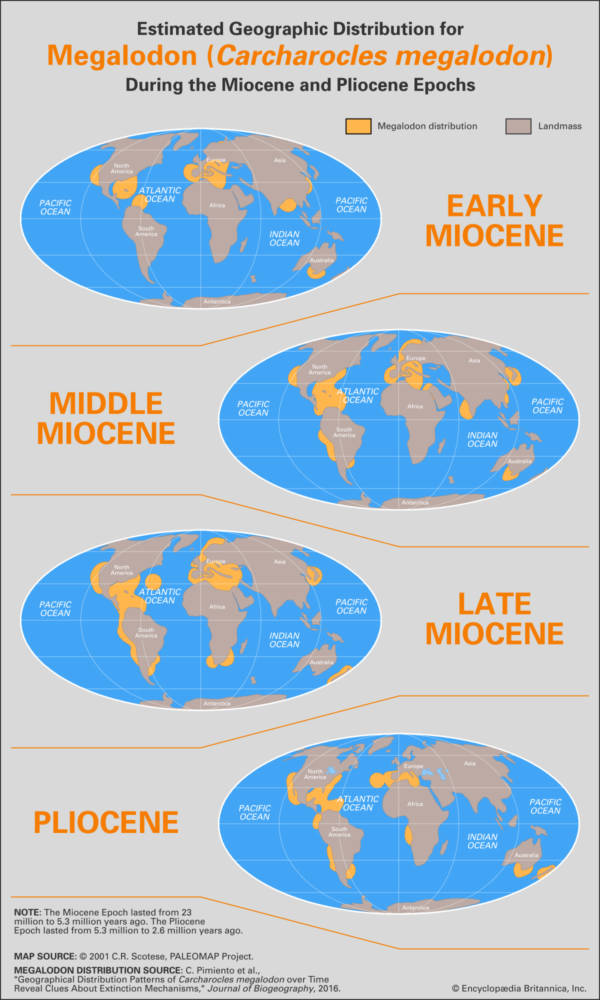 Patterns of megalodon distribution during the Miocene and Pliocene epochs were estimated using the locations of collected fossil teeth.

During its reign, it is believed that the megalodon preyed through nearly every corner of the early oceans as their teeth have been found on every continent except Antarctica.

The shark preferred warmer waters and tended to stick to shallower and temperate seas, hunting in those waters which covered much of the planet.

But because the megalodon was so enormous animal, the shark had to eat a ton of food a day — literally.

They preyed on large marine mammals such as whales, snacking on baleen whales or even humpbacks. But when the larger meals were scarce, the megalodon would settle for smaller animals like dolphins, seals, and even smaller sharks.

Death, when a megalodon attacked, did not come quickly. Some researchers say that the megalodon strategically hunted the whales it devoured by first eating their flippers or tails to make it harder for the injured animal to escape.

During its heyday, the megalodon was at the absolute top of the food chain. Scientists believe that mature, adult megalodons had no predators.

The only time they were vulnerable was when they were first born and still only about seven feet long. From time to time, large, bold sharks like hammerheads would brave an attack on a juvenile megalodon, as though attempting to cut it out of the ocean before it got too large to stop. 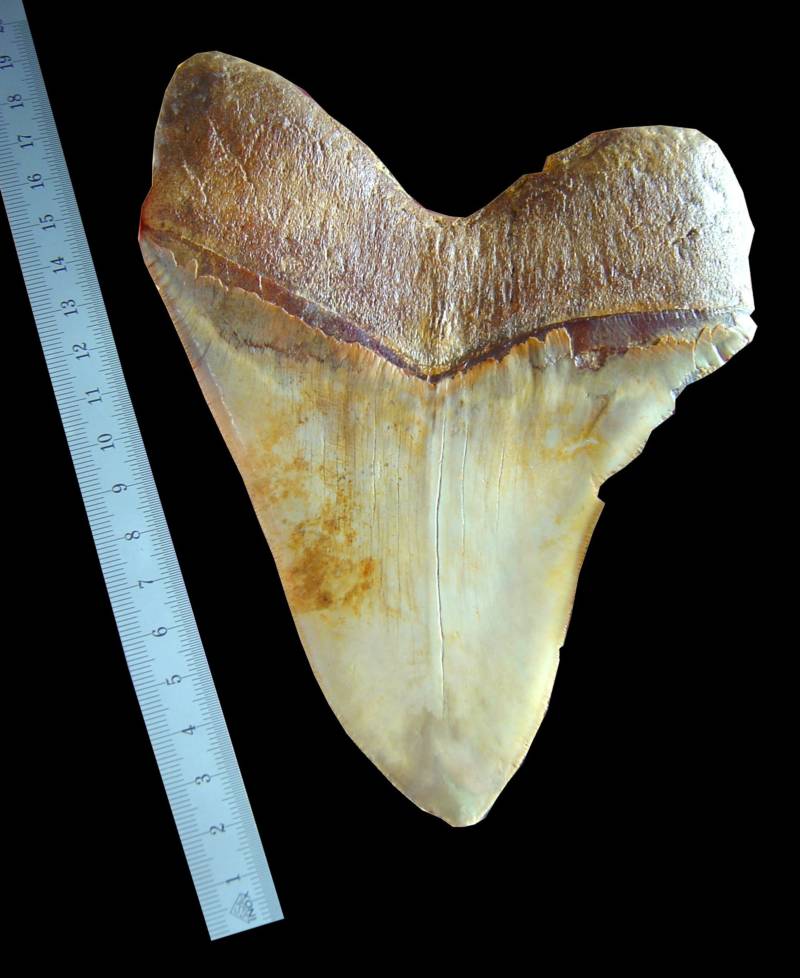 Megalodon tooth next to a ruler for size comparison.

It’s hard to imagine how a killer as massive and powerful as the megalodon could ever have gone extinct. But some 2.6 million years ago, at the end of Pliocene epoch, the last of the megalodon died.

Nobody knows for sure how it happened — but there are theories.

One theory points to cooling water temperatures as a cause for the megalodon’s demise. About three million years ago, the Central American Seaway connecting the Atlantic and Pacific Oceans closed which drastically cooled the earth’s oceans.

Some researchers believe that the megalodon was unable to adapt to the cooling waters. Their prey, however, could, and moved into those cooler waters where the megalodon could not follow.

According to the Natural History Museum of London, the cooler waters also killed off some of the megalodon’s food sources, which could have had a crippling effect on the shark. Up to a third of all large marine animals became extinct once the water cooled, and this loss was felt up and down the entire food chain.

Woman standing in the jaws of the megalodon.

However, recent studies have shown that the megalodon’s geographic distribution did not significantly increase during warm periods or decrease significantly during cooler periods, suggesting that there must have been other reasons contributing to their extinction.

Some scientists point to a shift in food chain dynamics as a cause of their fall.

Dana Ehret, a curator of paleobiology at the New Jersey State Museum told National Geographic that because the megalodon depended on whales as a food source, when the whales’ numbers dipped, so did the megalodon’s.

Without the large numbers of fatty whales to feed on, the megalodon’s huge size could have hurt them. “Meg might’ve gotten too big for its own good and the food resources weren’t there anymore,” Ehret says.

Plus, other predators, like great whites and killer whales, were around and competing for the diminishing whales as well. Smaller numbers of prey plus larger numbers of competition equaled big trouble for the megalodon.

Could The Megalodon Still Be Alive?

While scientists argue over the top cause for the extinction of the megalodon, they pretty well all agree on one thing: the megalodon is gone forever.

Despite what cheesy horror movies and a fabricated Discovery Channel mockumentary would have you believe, it is nearly universally believed in the scientific community that the megalodon is indeed extinct.

One common theory for the megalodon still existing, portrayed on the big screen in 2018’s The Meg, is that the giant predator still lurks in the depths of our unexplored oceans. On the surface, this seems like it could be a plausible theory considering a large percentage of earth’s oceans remain unexplored.

However, most scientists believe that if the megalodon was somehow alive, we would know about it by now. The sharks would leave huge bite marks on other large marine creatures like whales and there would be new, non-fossilized teeth falling from their mouths littering the ocean floors.

As another scientist put it: “We’ve spent enough time fishing the world’s oceans to have a sense of what’s there and what’s not.”

Plus, if some version of the megalodon did defy all of the odds and was still alive in the ocean’s depths, it would look like a shadow of its former self. The shark would have had to have undergone some serious changes to adapt to living in such cold and dark waters.

Even if megalodons did swim in modern oceans, one scientist assures us that humans would not have to worry about becoming meals.

“They wouldn’t even think twice about eating us,” Hans Sues, the curator of vertebrate paleobiology at Smithsonian’s National Museum of Natural History, said. “Or they would think we are too small or insignificant, like hors-d’oeuvres.” 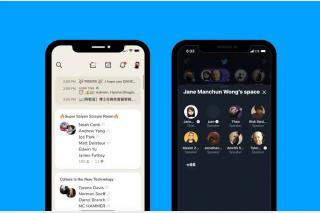 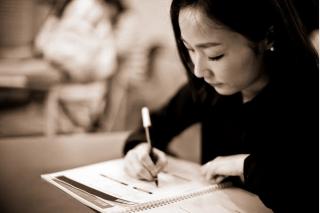 Megalodon: The Prehistoric Shark 10 Times The Size Of T-Rex